Most women diagnosed with ovarian cancer will not survive five years from diagnosis. Veronica shares her story as an ovarian cancer survivor and mother.

“When my son was in primary school one of the little girls at school had cancer and died. This is what my son knew of cancer; that cancer kills” reflects Veronica on the day 10 years ago she had to tell her 12 year old son Jordan the she had ovarian cancer.

Veronica and her youngest son Jordan, three years after she was diagnosed with ovarian cancer.

I was quite active at the time of diagnosis. It was the school holidays, I am a high school teacher, and I had some visitors from overseas. We did a lot of walking and when I look back on the photos we took you can’t see any signs of cancer even though I was diagnosed one month later.

I had very vague pains in my stomach that came and went but it was not very often, only very occasionally. I thought I may have developed sensitivity to some foods. I even gave up coffee!

Right at the very beginning of the new school year I was standing in the classroom at the board and I suddenly didn’t feel well. I thought I was going to faint. So I asked a colleague to keep an eye on the class while I went to the bathroom and waited for the feeling to pass.

Later that week I sat on the couch at home and put my legs up on the coffee table. To my surprise one of the legs, my left leg was swollen like a balloon and my toes were sticking out like an inflated rubber glove. It was so odd to me I was poking it with my finger but there was no pain.

The next morning I saw the GP who quickly detected that I had some swollen lymph nodes in my groin. That same day I had a CT scan and biopsy, which confirmed it – I had cancer.

My older son and daughter came with me to the appointment. The doctor asked ‘do you know what stage 4 means?’ The ovarian cancer was in my lymph nodes, all over my body I thought it could very easily spread somewhere else.

I had chemotherapy, surgery and then radiation to my lymph nodes. It’s normally not standard to have radiation therapy but they offered it to me and I think this is what helped me to live for so long.

Then, four years later I relapsed, this time the cancer had spread to my brain. It was operated on and I was given steroids which reduces the swelling. One of the side effects of the steroid is mania and change of personality, insomnia. I got it all.

This had such a big impact on my family. I was living with my youngest son at home. No-one was aware of the changes which were happening each day.
One night I had a complete emotional break-down. I was just screaming to God, ‘why the cancer didn’t kill me?’, ‘why did I have to go through this? It is killing my family!’

That night I wrote an emotional email to my gynaecological oncologist and even though it was night he read that email and alerted my oldest son to take me immediately to emergency. At that time I was hallucinating. I was diagnosed with steroid-induced psychosis.

One year after my first brain surgery and radiation therapy I experienced a side-effect from the radiation which was brain necrosis. Initially the doctors weren’t sure if it was a recurrence of the cancer or brain necrosis. It was operated very aggressively and as a result I lost my right peripheral vision and that’s why I have vision problems.

Two years ago the cancer came back again, now on a different side of my brain.

I was operated on and this time it affected my balance. But I’m happy and I’m glad that I can still look after myself, even if I’m the only person who walks with two hiking poles at the shopping centre!

Cancer and being a mother

When I was first told I had stage 4 ovarian cancer I was so worried and scared about myself. I didn’t talk about it to my youngest son. He was 12 then and probably wouldn’t even know where the ovaries are or what ovarian is. He only knew that I was diagnosed with cancer. I told him I will do whatever I can to survive but that’s it.

I started to teach him how to look after himself. I remember when I was showing him how to use the washing machine he was quite reluctant, I said ‘Look! If I am not here or I have to go to treatment or if I am unwell you have to do your own washing!’

When I was going through chemotherapy I was very unwell. I could still function but I was getting weaker and weaker. In those days Jordan mainly survived on canned food. I told him this is what soldiers in the war survived on! He was happy he got to choose them himself and we tried to find the most nutritious ones. My sister also brought food.

I went to his school and told the counsellor that I was diagnosed with ovarian cancer. I asked them to keep an eye on him and maybe to talk to him about it.

Sometimes I feel guilty that I just left him to deal with it himself. I just had to concentrate on myself and doing whatever I could to get better.

My mental and emotional breakdown definitely affected my relationship with my youngest son. When it happened, he was in year 11 and studying for his HSC.

Through everything, my family has been very supportive.

Twice recently we have rented a house at the beach so we can all spend some time together. We’ve had such great times at the beach.

Every 4 months now I have a brain MRI to check the cancer isn’t coming back. I told my son I’d like to fly in a balloon over the Hunter Valley, I’ve never flown in a hot air balloon. We might do it together with his wife and eldest daughter.

I live a lot in the present.

I have the BRCA gene mutation, which is a risk factor for ovarian and breast cancer. My older son is a carrier and he has two daughters so each of them has a 50% chance they could inherit the gene.

Research is so important for giving the next generation a better chance at surviving ovarian cancer than we have today.

I accepted my situation a long time ago: we all die of something. I have had so many relapses, but I have survived. In my case I exceeded the wildest expectations. I’m very much aware of it.

Through research there will be better treatments and women will have a better life because of it. 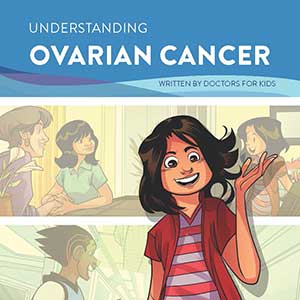