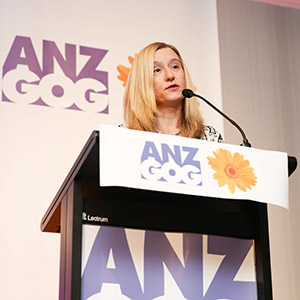 The PORTEC 3 endometrial cancer trial has been ten years in the making but now provides insights into better treatments. Better treatments improve lives.

The PORTEC-3 trial studied the value of additional treatment given after hysterectomy to women who were at high-risk of relapse after surgery because of the stage or disease characteristics of their cancer. The trial sought to determine whether women who have high-risk endometrial cancer have better outcomes when treated with post-operative radiation plus chemotherapy compared with the current standard of post-operative radiation alone.

A total of 660 women participated on the trial, which was active at 103 sites internationally.

Participants were randomly assigned to one of two groups. Both groups received the standard treatment of radiation to the pelvic region, while one group also received chemotherapy (cisplatin) at the same time as radiation, followed by 4 cycles of adjuvant chemotherapy (carboplatin and paclitaxel).

The main outcomes assessed were overall survival and failure free survival. Overall survival is the main outcome researchers seek to improve and is defined as the length time from when you are diagnosed with the cancer to the time you die, from whatever cause (eg a heart attack, the cancer). Failure-free survival is defined as being alive without relapse, or death from endometrial cancer.

“Women who received both radiation and chemotherapy in the PORTEC3 trial were less likely to have their cancer relapse, although there was no improvement in the number of women who survived five years from diagnosis. The main benefit was seen in women with stage 3 disease who were at the highest risk of their disease relapsing” said Professor Linda Mileshkin, one of the ANZGOG leaders on the trial.

It is important to understand that trials look at different types of survival and “overall survival” is the main one we seek to improve. This is the time from when you are diagnosed with the cancer to the time you die, from whatever cause (eg a heart attack, the cancer). PORTEC-3 showed an improvement in “failure-free survival”, which is the time from diagnosis to the cancer returning or death from the cancer. It is still an important result given that if the cancer returns it may not be possible to cure it.

ANZGOG conducted a patient preference study among the women participating in PORTEC-3 and found that most patients rated a 5% survival improvement sufficient to make chemotherapy worthwhile.

For women with stage I–II endometrial cancer this new schedule of additional treatment is not recommended because these women generally did well with post-operative radiotherapy alone.
In view of the higher risk of recurrence among women with stage III disease, radiation and chemotherapy can be considered, and the potential benefits and risks should be individually discussed.

“The trial results did show a significant benefit from the additional treatment option in women with stage III endometrial cancer – in terms of making it less likely that their cancer would come back. But given overall survival is not significantly better and the treatment can have side-effects, individual patient counselling is essential” said Professor Mileshkin.

PORTEC-3 was a multicentre trial with strong international collaboration among six participating groups, led internationally by the Dutch Cooperative Gynecologic Oncology Group and in Australia by ANZGOG.